Why the Trade Deficit Matters 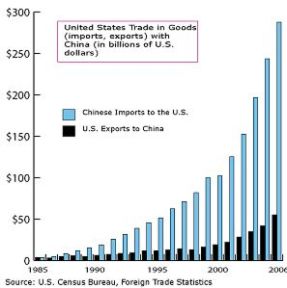 Now I know for many libertarians it get’s frustrating debunking common protectionist claims that the trade deficit must be fixed through higher tariffs and penalties on nations that engage in “unfair trade”. I get it, but what I see countered by prominent libertarians minds is that the trade deficit does not matter. They trumpet that capital will flow to where it can be most productive and if that causes a trade deficit then it’s the product of natural market forces. While it is true that capital does flow to where it is most productive, it is not true that three decades of continual trade deficits is the product of natural market forces. Prominent libertarian minds will then blame the outflow of capital on America no longer being competitive in the global market because of high labor costs (imposed by the Government) and high regulatory costs (imposed by the Government). While these problems inhibit economic growth, cause the U.S. economy to be sluggish, and therefore cause American based businesses to be uncompetitive in the global market, it still does not account for three decades of trade deficits.

I have a few questions for my libertarian friends that believe the previous points are why the U.S. runs trade deficits.

#2- After the massive interventions and regulations on the U.S. economy by FDR why didn’t the U.S. run trade deficits for three decades without correction?

#3- After the Great Society social engineering policies of LBJ, why didn’t the U.S. run massive trade deficits because of it’s inability to compete?

The answer lies within the monetary systems of world governments which few understand and few care to learn about.

Despite the growth of Government and the lowering of tariffs (for my protectionist friends) throughout the 20th century the U.S. trade deficit is one of a seesaw. We may run a deficit for one or two years and then rebound with a surplus. Why did this occur? Well we need to go back to an earlier point which is that capital flows to where it is most productive. What this means when you are trading a monetary unit of exchange is that the dollar, euro, yuan, RMB, etc will flow into markets where it is worth the most therefore it can be more productive. Once you realize that the answer is right in front of your face.

THE US DOLLAR IS THE WORLD RESERVE CURRENCY AND IS NO LONGER BACKED BY A COMMODITY LIKE GOLD.

When you have either an independent currency backed by gold or not that’s value is set and cannot be devalued further and run a trade deficit, you will put deflationary pressure on prices in your domestic market while at the same time face inflationary pressure on imported goods (since you have been exporting currency instead of product). This forcing capital to flow back into the domestic market causing a surplus. What is keeping this type of correction from occurring?

#1- The Federal Reserve is terrified of any price deflation as they believe in a Keynesian fallacy by in large that if prices begin to fall they will not stop and the economy will go into free fall indefinitely. Because of this when the U.S. faces deflationary pressure caused by exporting 600 billion dollars a year, the FED will simply lower interest rates below the market rate so that banks will expand credit and prevent such deflation.

#2- Because of Bretton Woods II (which is an agreement made between the worlds central banks) the U.S. has been put in the position of having the world reserve currency where major world commodities are priced in dollars as well. THINK OIL. Since these major commodities like oil are priced in dollars when the U.S. begins exporting inflation and the FED follows the above policy the rest of the world’s central banks also devalue their own currencies as to maintain their peg to the U.S. dollar. Why do they do this?

Well there could be a few reasons, but I’ll tackle what I think the major one is. Some really do believe that a weak currency is beneficial to their economy since it invites more U.S. dollars to flow into their country boosting jobs and exports. The problem with that analysis is that while they get more jobs and exports with more U.S. dollars flowing in, their citizens face crippling inflation and while the low wages they are being paid seem better than the alternative their standard of living becomes eroded over time.

That is my hypothesis on what I believe is happening with trade. Feel free to comment or disagree.  I do believe that this over consumption under producing ride we are on because of the gift of having the world reserve currency will come to an end. At some point in time the rest of the world’s central banks will no longer be able to devalue for their perceived economic benefits, as their workers will be unproductive starving slaves. At this point in time capital may be forced to flow back into the United States, and if this happens all of the money the FED has printed will come back to bite us in a big way. Think Hyperinflation. The simple truth is nations are like people. One cannot consume more than one produces forever.